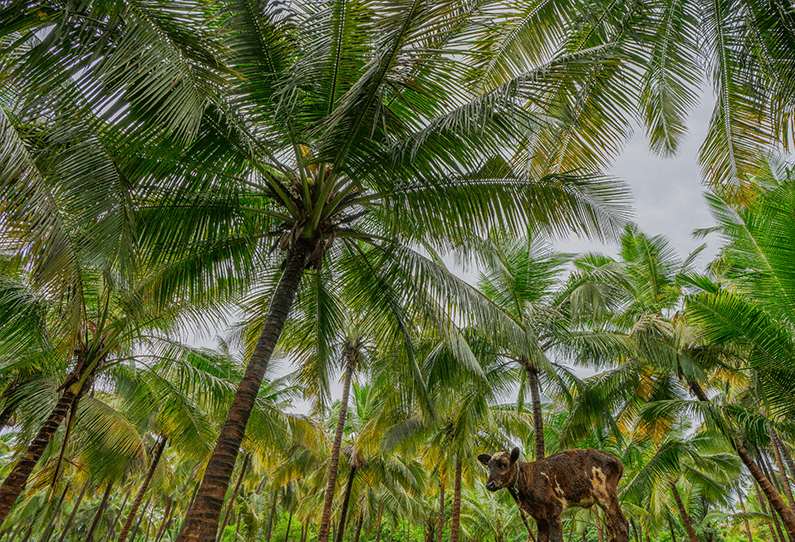 Every single farmer wishes to keep his coconut farm green and healthy through out the year. And who keeps coming always into the scene as villains? Yes, the pests. Along with the notorious Rhinoceros Beetles and Red Palm Weevils, there is Black Headed Caterpillar (Opisina arenosella), a serious pest of coconut, which feeds on the leaf tissues leading to the damage of leaves. As the pest population will increase during summer and dry weather, a proper management plan is needed to prevent further pest infestation, which is very much important in coconut cultivation.

It is the larvae of coconut caterpillar that causes the damage, feeding on the surface tissues of the underside of the leaflets. The female caterpillar lays about 130 eggs in several groups on the older palm leaves, which hatches in 5 days. The full grown larvae is 15 mm long, light green with dark brown head and reddish brown strips.

The attack of Caterpillars can be recognized by dried up and green patches appearing on the upper epidermis of leaves, presence of larval silk galleries, moulds and pupal cases on lower surfaces of leaves. The areas from where the surface tissues have been eaten turn brownish and turn in to dry patches, which gradually extends all along the leaflet. These symptoms are usually appear on the older leaves first and later spread to younger leaves. These dried areas of the leaflets break and drop away gradually, at which point the tree looses it’s stability. On severe conditions, the whole plantation exhibits a scorched appearance.

To prevent furthermore damage and control the situations, it is important to cut and burn the heavily affected and dried outermost leaves. On severe outbreak, spray Dichlorvos 0.02% (Nuvan 100EC 1 ml/5L) or Malathion 50EC 1ml/1L on the underside of the leaves. Parasitoids of Black Headed Caterpillar can be released 3 weeks after spraying these initial pesticides for caterpillar, depending on pest attack, at 15 days intervals till the population is under control. Names like Bethylid, Goniozus Nephantidis are proven efficient among parasitoids when it comes to controlling these larvaes. Parasitoids should not be released in the crown region since they will be killed by predators like spiders, bugs etc.